What is Cognitive Fixedness? 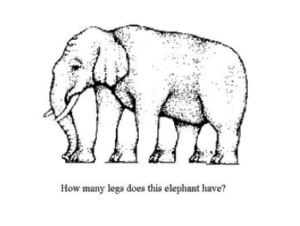 Cognitive Fixedness is a state of mind in which an object or situation is perceived in one specific way, to the exclusion of any alternative. This phenomenon is extremely common because it is so efficient: it allows one to perceive, recognize and interact with familiar objects and situations based on past experience, rather than requiring a new analysis of every object with which we come in contact. But the price is a severe limitation of the ability to imagine new possibilities and innovative solutions. There are several types of Cognitive Fixedness, and the SIT Thinking Tools have been designed to assist in overcoming them.

Below is a description of one type of Cognitive Fixedness, Functional Fixedness.

Functional Fixedness is the tendency to perceive an object as having a specific function, leading to an inability to notice that it can fulfill other functions as well. This prevents one from imagining new possibilities for objects that have a known use. For example, the speakers in a car have a defined function – serving the sound system. Most of us are blind to the possibility that these speakers can be used for additional uses, for instance, speakers for the car phone.

The following experiment was performed in 1926 by a Swiss social scientist named Karl Duncker. A group of participants was split into two. In group A, subjects were presented with a situation in which a room contained a candle, a box of thumbtacks and a box of matches. The task was to light the candle and attach it parallel to the wall without touching the floor or burning the wall. An effective solution is to empty out the thumbtacks, attach the box to the wall using a thumbtack, and use this newly created “shelf” as a base for the burning candle. About 15%of the subjects came up with this solution.

In group B, the same situation was presented, but this time the thumbtacks were not in their box, but rather spilled alongside the box. Some 80% of the subjects in group B solved the problem as described above. Duncker named this phenomenon Functional Fixedness – the tendency to ascribe specific functions to respective objects. Since the box in group A had a defined function (i.e. holding the tacks), it was difficult to think of it as being able to perform a different task. But once it was detached from the function (as in group B, where the tacks were not placed in the box in the first place), subjects’ minds were free to assign it a new task – the task of acting as a shelf for the candle. When using thinking tools, one should always start by compiling a list of components or variables. By so doing, it is easier to break Functional Fixedness, as one is forced to think of each component as a separate entity; it helps “take the thumbtacks out of the box.”